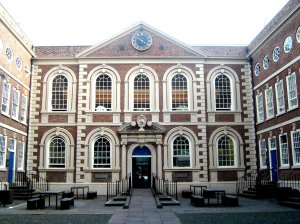 Our first networking event will be held in Liverpool on 19-20 September 2017.

Our venue on Day 2 will be the Bluecoat Chambers.

Day 1 will consist of visits to relevant buildings (coach provided), including

This Assembly Rooms on Mount Pleasant was designed by Edmund Aikin and built by subscription for the Wellington Club in 1815-16. It consists of a double-cube ballroom with musicians’ balcony at the rear, accessed by a central corridor, with side rooms for refreshments and card-playing. The portico at the front is based on the Monument of Lysicrates, with Corinthian capitals based on the Temple of Vesta at Tivoli – the open colonnade was enclosed to give additional protection. The left hand entrance was for sedan chairs, that on the right for carriages, which has also been enclosed. The carved plaques on the front, in the style of John Flaxman, have sometimes been attributed to local sculptor John Gibson (1790-1866), a protege of William Roscoe, but they are not mentioned by him in his autobiography.

After the Wellington club closed, the building had a number of functions, most recently as an Irish Club and Cultural Centre. It has now been closed for some twenty years and is on the Historic England ‘Heritage at Risk’ list.

The first of the ‘iron churches’ build by John Cragg of the Mersey Iron Foundry. Drawings for the project were produced by Thomas Rickman in 1812, before the present site was acquired. The land was given by James Atherton, and the funds raised in shares of £100 each, with any profits to be divided among the proprietors. St. George’s Church, Everton Act was passed in 1813 and the church was consecrated the following year. The exterior is stone, apart from the cast-iron window tracery. The galleried interior is entirely of cast iron construction, with ceilings and roof of slate, employing a system patented by John Cragg in 1809. The memorial tablet to John Rackham (d.1815) is also a Rickman design.

The township of Everton was originally on of Liverpool’s villages, which became popular as a residential location for the mercantile elites. The Shaws were major local landowners: John Shaw was mayor of Liverpool in 1800. Shaw Street was laid out in around 1826 by his son, Thomas Shaw, to connect Moss Street and Netherfield Road. The first houses were erected around 1829, intended to enhance Everton’s status as a prestigious suburb. Numbers 71 and 103 – 109 Shaw Street are currently on SAVE Britain’s Heritage’s ‘At Risk’ register.

This church was initially designed by the Corporation Surveyor, John Foster snr, in 1802, for a site at the top of Bold Street given by the twelfth Earl of Derby. The foundation stone was laid in 1811. In 1822 it was decided that the church should be extended to increase accommodation. This was done by adding a very large chancel, to the designs of John Foster, jr. The style is Perpendicular Gothic and it is possible that Thomas Rickman had some influence on the designs which are mentioned in his diary. The interior was originally covered by plaster fan-vaults which were destroyed when the church was bombed in 1941. It is now preserved as a war memorial and community arts venue and has recently undergone substantial restoration.

Bold Street was laid out as a residential street on the site of a former Ropewalk. By the early nineteenth century it had become more commercial, with a number of sites of polite assembly, including the Freemasons’ Hall, at which the Literary and Philosophical Society met prior to the acquisition of a building by the Royal Institution and a Diorama (in operation 1825-32).

This was originally erected following purchase of the land in 1797 by Thomas Parr (1769-1847), as a mercantile complex including a warehouse, counting house and carriage house. Thomas Parr was a major Liverpool merchant with substantial slave-trading interests. By 1805 he had moved to Lythwood Hall in Shropshire. In 1817 his house was acquired by subscription and converted for use by the Royal Institution (which received its charter in 1822) with the addition of a Greek Doric portico by Edmund Aikin. The Royal Institution building accommodated existing cultural societies without their own building, public lectures and classes, collections and a laboratory.

The Lyceum Library was first established as a subscription library in 1758, when it met in one of the founder’s houses. In 1800 it was proposed to erect a purpose-built library to house the collection and funds were raised by subscription. The architect was Thomas Harrison of Chester, who proposed an elegant Greek Revival design, which incorporated the library and a newsroom, as well as meeting rooms. The library and newsroom (which also served as a coffee room) had separate shareholders. on

Medieval Toxteth was a royal hunting park. It was dis-parked in the seventeenth century and converted to farmland. Puritans moved into the Otterspool area and constructed a school and later chapel. In 1771 an Act of Parliament was obtained by the Earl of Sefton for granting building leases on one of the Toxteth estates. The new district, known as ‘Harrington’ was planned by Liverpool builder Cuthbert Bisbrown, to include St James’s Church. However finances were limited at Bisbrown was declared bankrupt by 1776, his scheme incomplete. By the late eighteenth and early nineteenth century the area was becoming increasingly industrial, with enterprises including the Herculaneum Pottery (1796) and the Mersey Forge (1810).

Ancient Chapel was originally erected in 1618 as a chapel to serve the local Puritans. It was partially rebuilt in 1774 and retains an interior arrangement of that date but including north and south galleries and two box pews of earlier date. It is one of England’s oldest dissenting meeting houses in continuous occupation and is still in use. The graveyard contains monuments to many of Liverpool’s prominent Unitarian families. 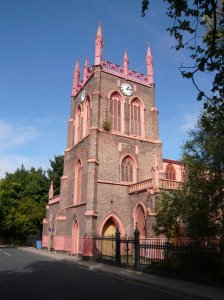 St Michael’s Church was erected by John Cragg at his own expense, as a chapel of ease to St Mary, Walton, on land acquired from the Earl of Sefton. It was conceived before St George’s Everton but erected later (1813-15) and makes more use of cast iron for external features such as pinnacles, whilst the exterior walls are brick. Designs were again provided by Thomas Rickman.

St Michael’s was erected as part of a residential development with a number of villas, some Classical and some Gothic. The Gothic villas were given suitably medievalist names, including The Friary, The Cloisters, The Hermitage, The Nunnery and The Priory. Rickman’s diary reveals that he disapproved of the Gothic villas for their incorrect styling.

The Allerton Manor estate was purchased by John and James Hardman, West India merchants, in 1736. The present house dates from the time of John Hardman, who died in 1754, leaving the property to his widow. The house is in a Palladian style and is a rare survival of the grand suburban villas erected by the Liverpool mercantile elites. In about 1779, ownership passed to William Roscoe, who made it his main residence and undertook alterations to suit it to his status as a man of letters. Despite later nineteenth century alterations, and fires in the 1990s, the decoration of room identified in 1824 as the Breakfast Room and parts of Roscoe’s library survive. He had to sell the property when he went bankrupt in 1816; the published sale catalogue of the library reveals the extent of his collection. Many of his books were purchased by his friends and are now in the library of The Athenaeum.